At his first Christmas as Prime Minister, John Curtin was to spend the holiday in Canberra while Elsie was with the family at home in Western Australia. Object #37 is the telegram sent by John to Elsie during this first war time Christmas of 1941. 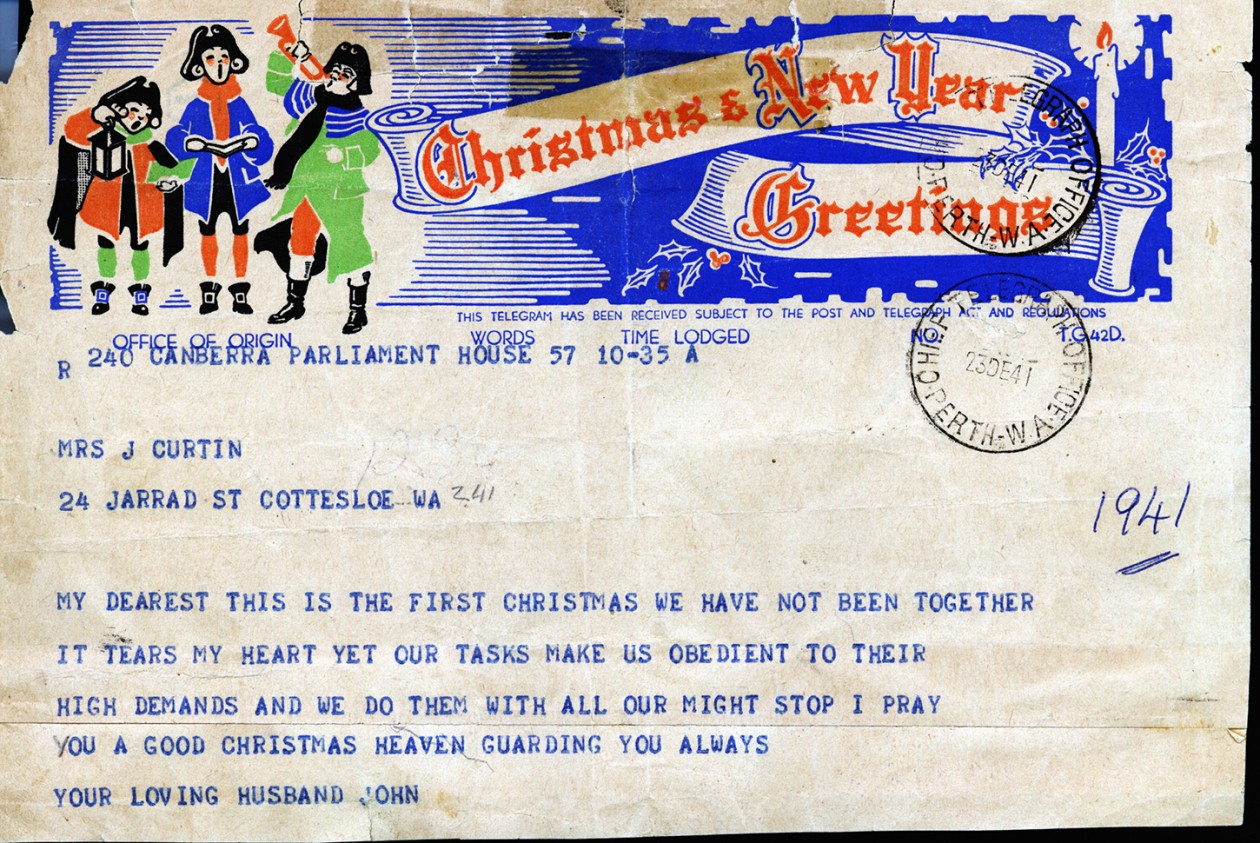 The Curtin’s family life was characterised by periods of separation, and once Curtin was appointed Prime Minister he spent most of his life away from Western Australia, with occasional visits home for holidays. On the occasion of the first Christmas of WWII, Elsie had already returned to Western Australia. John remained in Canberra, and would not see another Christmas at home. He would have felt the separation keenly/deeply.

Curtin sent telegrams to Elsie for significant occasions and regular letters during his absences, from before they were married until the final months of his life. The JCPML holds seven of the telegrams Curtin sent to Elsie between 1916 and 1941. This Christmas telegram, JCPML00402/39 is the last in the set kept by his family.

Christmas at the Lodge

There was little cause for celebration for Curtin in December of 1941. Australia was at war and the Curtin government was rapidly implementing measures to direct resources to the war effort. After making statements in the days before Christmas on holidays and shopping on Dec 16th  and Dec 17th, restrictions on annual leave on Dec 19th, and the institution of daylight saving on Dec 23rd , Curtin took a few minutes to send Elsie the Christmas telegram. On Christmas Day with no family to make him get up, he stayed in bed until 11am.

Curtin would invite West Australian RAAF servicemen stationed at Fairbairn as his guests to share lunch on Christmas Day. The 30 servicemen drew lots, with six attending the lodge for Christmas, and the others invited to dine with him in groups of six over the next few weeks. Later in the day Curtin would join the Governor General Lord Gowrie and Lady Gowrie for dinner at Government House.

The following year Curtin would again remain in Canberra and entertain RAAF servicemen on Christmas Day. The continuation of the war for the next three years and Curtin’s subsequent decline in health would ensure that John and Elsie Curtin would not get to spend another Christmas together.