The Stones of Venice: Sea Stories

Through the course of the 50 Objects project we have explored hidden links and untold stories in the library special collections. There were many items we could have chosen as object #50, but in the end, we thought John Curtin’s copy of The Stones of Venice: Sea Stories by John Ruskin would bring an apt conclusion. This final post links Ruskin’s influence on John Curtin’s ideology and aspirations, his ultimate view on the democratic value of university education, and the source of the Curtin motto.

John Ruskin, was born two hundred years ago and became a highly influential art critic and social reformer of the Victorian era. His writing ranged from art criticism, to architecture, and with a later focus on education. Ruskin’s zenith had peaked well before his death in 1900, but his ideas lived on in the socialist movements of Britain and Australia into the early 20th century.

By the time of Ruskin’s death, John Curtin, who had left school at the age of 14, was continuing his education in the world of work through extensive reading and involvement in the worker education programs of the Victorian Socialist Party (VSP). Some of that early reading included works by Ruskin, promoted by the VSP leading men while it was active in the early years of the 20th century.

Curtin spoke on Ruskin, art and socialism as early as 1910 in lectures delivered for the VSP. In these early lectures he drew on Ruskin’s views of the use of men as tools, not as artisans, from The Stones of Venice.  (The Socialist, 6 Sep 1912, p1 At the Gaiety. J Curtin on “The man on the job”). 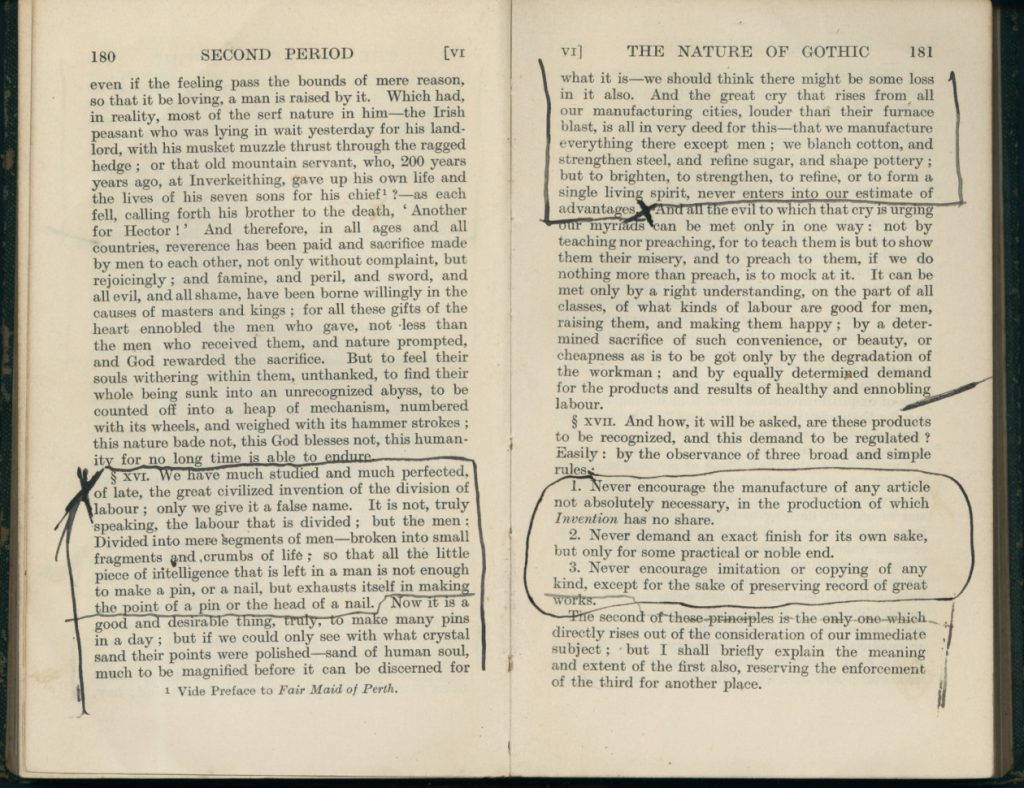 Marks on The Stones

Apart from some heavily marked exceptions, books from Curtin’s personal library generally have minimal annotations or marginalia. His copy of Ruskin’s The Stones of Venice v2 Sea Stories (JCPML01282/47) is one of the few books with evidence of Curtin’s hand on the pages. In library language this book could be described as ‘defaced – spine damaged’, but the marks left by the owner, when he took pen and ink to mark the pages, do provide some idea of the importance Curtin placed on Ruskin’s theories. 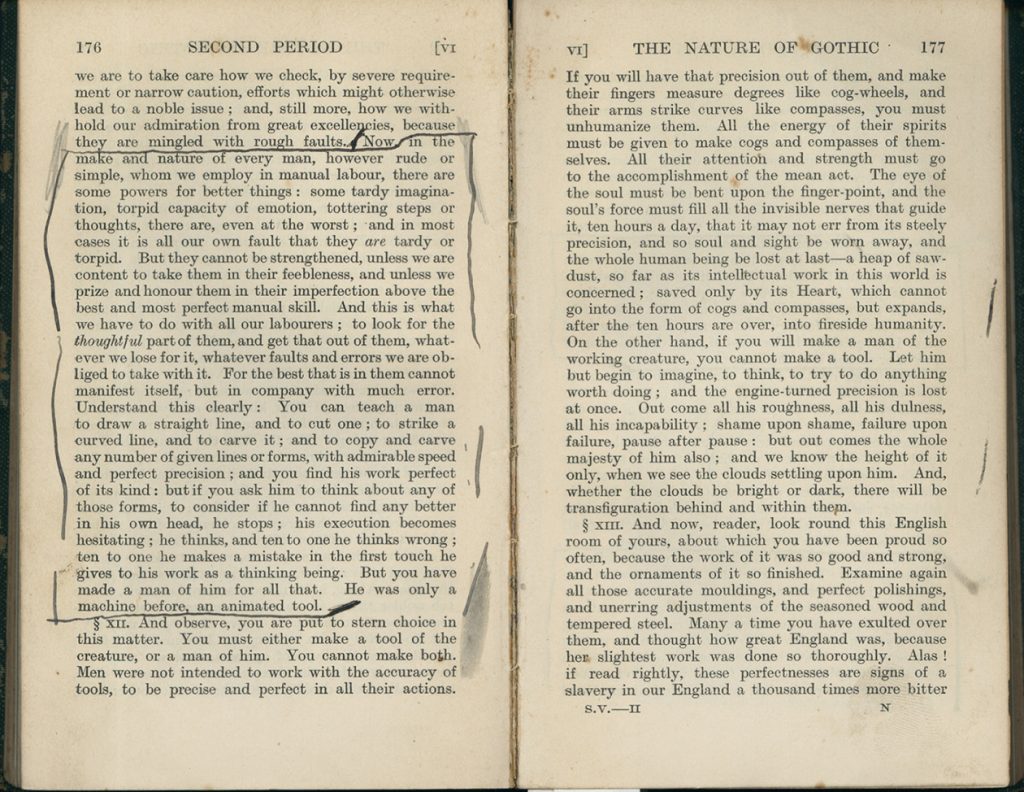 From the Stones of Venice to the University

After World War I the popularity of Ruskin had declined, the VSP had ceased, and Curtin’s views of socialism evolved as his politics matured. However, Curtin did not abandon Ruskin, citing him several times in articles and editorials for the Westralian Worker. More than 20 years after preparing those lectures for the VSP he returned to Ruskin’s Stones of Venice in The views of Labour column written for the West Australian.

During the second week of April 1932 celebrations for the opening of the Hackett Memorial Buildings and Winthrop Hall at the University of Western Australia received frequent press coverage. As an occasional columnist Curtin usually wrote on contemporary politics but in this piece his focus is university education (The West Australian, 16 April 1932, p9).

Ruskin is his inspiration when Curtin writes on education and his hopes for what the University should be.

From these lines penned by Curtin in 1932 came the motto chosen for the Curtin University in 1988 – Look ever forward.

The great University should find its heroes in the present;

Its hope in the future;

It should look ever forward;

For it the past should be but a preparation for the greater days to be.